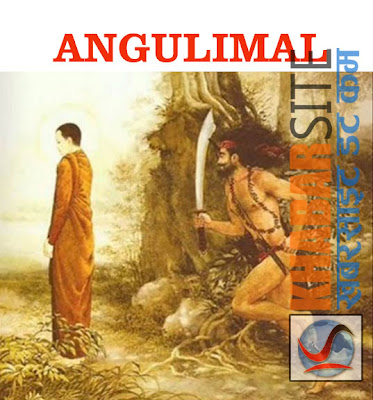 Director Vijay Bhatt is noted for his period films, like "Ram Rajya," "Bharat Milap", "Chaitanya Mahaprabhu" and "Baiju Bawra." An addition to this impressive record is "Angulimaal," in which Bharat Bhooshan plays the title role.

The story, set in Buddhist times, depicts the life of a scholarly youth who is destined to live two lives of completely opposite character as a killer and as a saint. He shows prowess in all the arts and is expected to bring a good name to his family and the community, but finds himself on the wrong side of the law due to the jealousy of some of the inmates of the Ashram where he is studying.

Wrongly accused of gross moral lapse, he runs amuck, kills hundreds of innocent people and lives a savage life. In the end, however, he is reformed and accepts the Buddhist teaching and way of life.

The story as well as the complexity of the character he portrays provide Bharat Bhushan with plenty of scope for histrionic expression. The three main facets of the title role — the scholar, the killer and the saint-- are so diverse that it is only the deep understanding and sincerity of Bharat Bhushan that make the character real.

As the hero's beloved, petite Nimmi puts over a fine portrayal. It is refreshing to see her on the screen again after a long time. Anita Guha gives a compelling performance, and Ulhas is convincing as the guru. Chandrashekhar, Achala Sachdev, Manmohan Krishna, the late Prem Adib, Vinod Kumar and Sheila Kashmiri are adequate in their respective roles. Dancing starlet Helen does justice to her dance numbers.

Maestro Anil Biswas has written a fine music score, and the theme song, "Buddham, Sharanam, Gachhami," is inspiring. Bharat Vyas's lyrics are appropriate to the theme as well as the mood of the film.