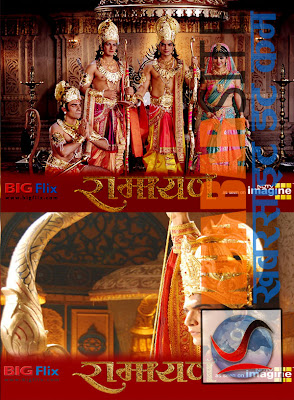 A brand new series based on Valmiki's Ramayan and Tulsidas' Ramcharitmanas. Produced by Sagar Arts, the family that introduced mythology on television, this age old classic is retold with grand sets, a new star cast and lilting music.

The enthralling production values and fresh approach to the storytelling gives the new Ramayan an appeal that will entertain and delight viewers across all age groups.


The entire production is being executed at Sagar Film City in Baroda where grand sets have been erected to depict key areas in the kingdom of Ayodhya, the birth place of Lord Ram. This new version has the advantage of being produced in times of huge technical advancements which will greatly enhance the story telling in a compelling new way.

The Sagar family, which scored television's biggest triumph in the Eighties with the classic blockbuster Ramayan, takes you back to the story of Shri Ram in an all new spectacular magnum opus television serial. The new Ramayan comes with fresh screenplay, dialogue, sets, music and cast. It now has visual special effects and technical finesse at the disposal of the makers. Their ultra modern post-production studios will embellish the new production with skillful special effects. Painstaking research of the period has yielded rare information that is being creatively harnessed to give authenticity to the sets and costumes.

The characters in Ramayan will be essayed by a new generation of actors - Gurmeet Choudhary will play the lead of Lord Ram, while Debina Bonnerjee plays Sita. The 3 key characters - Lakshman, Bharat and Shatrughan will be played by Ankit Arora, Vije Bhatia and Lalit Negi respectively.

Some of the country's best talent is associated with the show:

The music of Ramayan has been composed by Ravindra Jain
The extravagant sets have been designed by renowned art director Omang Kumar
Celebrated designer Nisha Sagar has created the costumes and accessories
Kavita Krishnamurthy and Suresh Wadkar have lent their voices for the title track
This evergreen epic saga of Lord Shri Ram undertaken by the next generation of Sagars promises to take this magnum opus to greater heights. The Sagar family, committed to the tradition of creating entertainment with a moral and social message was initiated by Dr. Ramanand Sagar. Dr. Sagar was the legendary filmmaker and television mogul who founded Sagar Arts in 1950 with a silent pledge to provide clean and wholesome entertainment to the masses.
Share this clip :
Labels: Religious
« Prev Video Next Video » Home