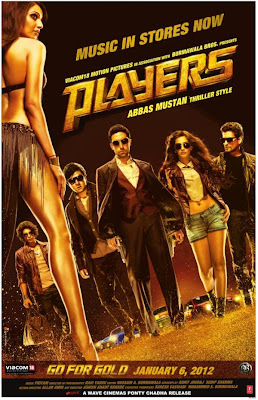 Players (Hindi: प्लेयर्स ) is a 2012 Indian action thriller, heist film directed by duo Abbas-Mustan and produced jointly under Viacom 18 Motion Pictures[2] and Burmawala Partners. The film has an all star ensemble cast, featuring Abhishek Bachchan, Sonam Kapoor, Neil Nitin Mukesh, Bipasha Basu, Bobby Deol, Sikander Kher and Omi Vaidya in the lead roles, whilst Aftab Shivdasani makes a cameo appearance.[3] The theatrical trailer was revealed on 3 November 2011, and the film was released on 6 January 2012.[4] It is an official remake of 2003 Hollywood blockbuster, The Italian Job,[5]whose rights were bought by Players producers Viacom 18 and carries over the basic plot-line.
Players was filmed extensively in foreign locations such as New Zealand, Russia and even The North Pole, thus becoming the first ever Bollywood film to be shot there.[7][8] The story follows a team of players, consisting of a con-man, a con woman, an illusionist, a explosives expert, a professional hacker and a disguise master who plan to rob gold worth 100 thousand crores, from a moving train. During the process they are double crossed by some of their own team members.
Upon release the film received mixed reviews from critics, and despite the multistar cast and the film being heavily hyped, it turned to be a surprise failure at the box office.[10][11] The shocking failure of the film led to many trade industry analysts reinstating the belief of a "jinx" in Bollywood that the first-released film of the year "always fails at the box office", as seen before with films such as Halla Bol (2008), Chandni Chowk To China (2009), Pyaar Impossible! and Dulha Mil Gaya (2010
Share this clip :
Labels: feature, hindi, movie
« Prev Video Next Video » Home